Capital letters are often used to emphasize single words. This applies, for example, to German as a language. Latin, Greek, … Although there are languages that do distinct between upper and lower case (with respect to nouns), it has nevertheless prevailed in most languages. Even in English you can sometimes find nouns with a starting capital letter. That applies not only to the spoken language, but also to programming languages or naming conventions for programming. For example, the CamelCase notation states that in compound words, the first letters of each word are capitalized.

You can also find a trend where the first word of a compound word starts with a small letter:

With that, the use of capital letters is also a commonly used convention for marking words, identifiers, function names, etc. in compound expressions.

The definition of rules for the notation of identifiers, function names, etc. is widely accepted among programmers and ultimately leads to a naming convention that determines how the language elements of a programming language are to be written. Still, many developers find it challenging to adhere to naming conventions. In fact, it can often be observed that developers are not consistent with their “own” preferred convention.

The following statement is defined in the view vTimeSeries in the database AdventureWorksDW2017 and was slightly revised by me. I did not bother to follow any naming convention.

In the following statement, function names are capitalized, all field names are delimited by square brackets, data types are written in lower case letters, and finally the statement is consistently aligned and formatted … 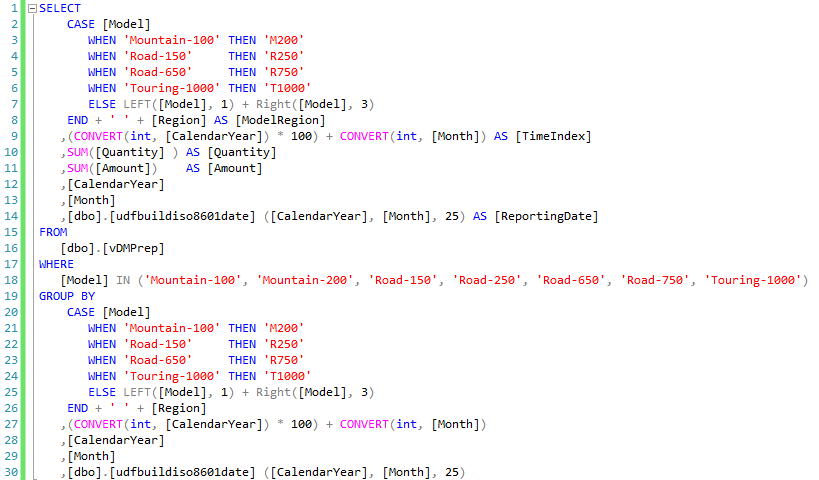 Whether or not the applied formatting is preferred by the reader, we probably can agree on that the second statement appears to be more readable.

With that there are some points identified being an essential part in a naming convention. In addition, there are a few other things to be discussed:

However, the definition of a regular identifier is, in my opinion, a much too broad definition.

While – for example – the underscore _ is widely used as a separating character between words, I usually avoid this character because the notation of a CamelCase identifier serves the same purpose and makes identifiers more compact.

I use only letters of the Latin alphabet [a-zA-Z] for identifiers. As long as it is possible, I try to avoid using numbers [0-9], too. This reduces the number of rules for choosing a good identifier to only two rules:

Among others I use delimiters for the following elements of the SQL vocabulary:

The following statement corresponds exactly to the second statement from this article. However, the identifiers are not noted with delimiters. Decide on your own which notation appears to be more readable: 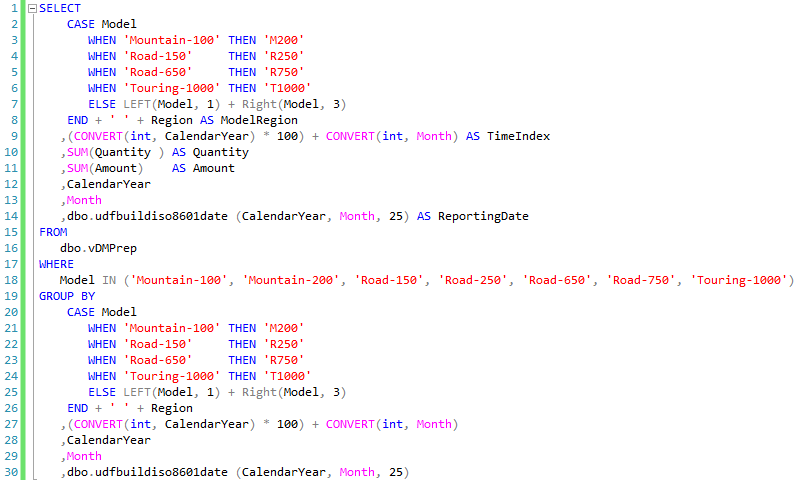 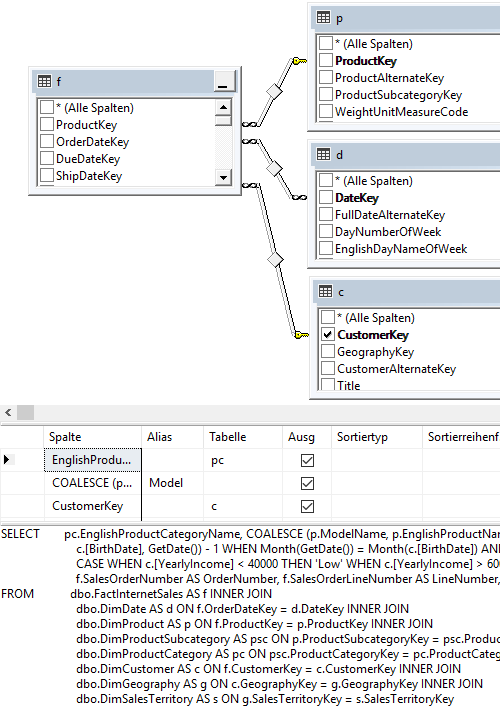 The natural reading order (of an SQL statement) is left to right and top to bottom.

While software code consists of quite a few short statements, SQL is designed to perform many operations in a single statement. A SQL statement can quickly cover hundred or more lines. With that, writing a good SQL statement appears to be challenging. An essential criterion for the understanding of an SQL statement is not only a clear structure and formatting of the statement, but also whether the statement is compact enough to get the major task on a short glance at the statement.

When using a high resolution and common editor font settings a maximum of 40 lines of SQL code are visible on a common monitor in SSMS. Most developers, however, will have only 25 lines code on the screen.

There are developers that insert blank lines after each line of code. An excessive use of blank lines requires the reader of a statement to use navigation keys or the mouse wheel to be able to read the complete statement.

Blank lines can be a good stylistic means of separating logical blocks. Excessive use, however, makes a statement harder to read.

According to standard SQL all SQL statements must be terminated with a semicolon. At least SQL Server does not force the programmer to use the semicolon.

There are only a few cases where the use of a semicolon is mandatory. For example, when using a Common Table Expression (starting with the keyword WITH), the preceding statement must be terminated with a semicolon.

In any case, using the semicolon is not only a matter of improving the readability of an SQL statement. It may help migrating an existing database application to a database of another provider.

And finally, using semicolons proves the developer to be accurate.

In an SQL statement a list of field names must be separated by a comma. When writing field names with each other you can prefix or suffix the field names with a comma. The pros and cons usually concentrate on the philosophic question how difficult it is to add a new field to the field list.

The most important reasons for prefixing field names are an improved readability on the one hand and a possible usage of the column editor feature on the other hand (see also Functional Design (Aesthetics) of SQL).

In opposite, when inserting the field at position one – before the field EnglishDayNameOfWeek  – two modifications are required: Add the field name

at position one without a trailing comma and prefix the second field with a comma.

When suffixing field names, the above arguments turn into the opposite: it is easier to add a new field at the beginning of a field list.

The comma is a separator. It marks the change from one field to the next. If the comma is written behind a field name, it loses its separating character due to the different lengths of the field names.

It is different with the comma written before field names. In this case, it is immediately obvious that the identifier Alias is not a field name because it has no preceding comma:

The comma and the column editor feature

Have a look at the following statement. It appears to be quite challenging to add aliases to all field names.

Each comma must be moved to the right. Before the comma you must add the keyword AS and after the keyword AS you must enter the aliases. These actions must be done line by line. What an effort for adding 5 aliases.

You can minimize the effort involved by prefixing the field names with commas and aligning neatly. In that case you can take advantage of the column editor feature.

Microsoft itself – but also other database providers – note function names in capital letters in the online documentation. So, why deviate from the standard?

A SELECT Statement using the above tables would look like as follows: 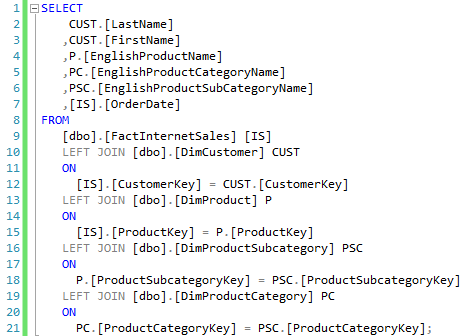 The varying indentation of the field names results from different lengths of the aliases. These have a length between 1 and 4 characters. The field list appears restless and can quickly become illegible with more complex statements and the use of other language elements (functions, CASE statements, etc.).

Imagine a SELECT statement based on 20 or more tables. At some point it will be difficult finding meaningful aliases for table names. Aliases may then appear too cryptic.

My personal view on meaningful aliases is that these aliases do not really improve the readability of a statement.

Wouldn’t it be easier to identify systematic – perhaps even indexed aliases – in a complex statement?

Systematic aliases could be defined as follows:

For example, using the letter T for tables as an alias (or F for fact table, D for dimension, etc.) followed by a 2-digit 1-based index with trailing zeroes, aliases would result to T01, T02, D01, F01, etc.

Using those aliases, the above statement appears more readable: 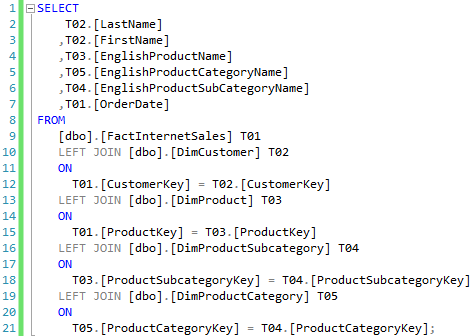 The field names within the SELECT list are neatly aligned.

However, the actual killer argument is also here: the notation of fixed length aliases allows the use of the power feature column editor.

In addition to this argument, there is another important reason why to use aliases: Only by using aliases, the Intellisense feature can be used efficiently. If the developer writes an alias followed by a dot, then a context menu opens showing only the field names associated with the alias:

If a statement covers multiple tables, you will be facing a situation where the same field name is available in more than one table. The following statement wants to return the names and phone numbers of both the employee and the reseller: 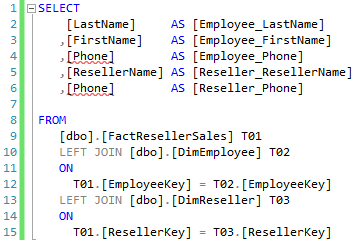 The statement is not executable because the field Phone exists in both dimensions DimEmployee and DimReseller. SQL Server throws two ambiguous column exceptions. Specifying an alias is mandatory here.

When defining an alias, then the developer must qualify a field name with that alias.

Using aliases means, that you use qualified names for an object. Another example for a qualified field name is prefixing the field name with the table name:

This option, however, does not really improve the readability of a statement.

n example for almost fully qualified object names you will find in the following statement: 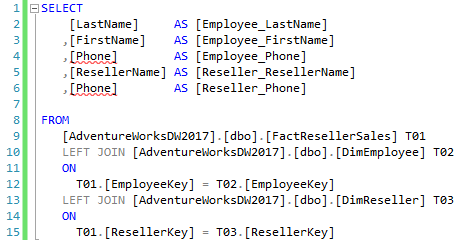 Qualifying an object beyond the schema name prevents a database application from being deployable in a database with a different name.

After all, using aliases should be mandatory at all, but be aware of the portability of a database application. Do not qualify object names beyond the schema unless there is a good reason for this.